C is for Chimera (Three out of Five)

I think we take certain D&D creatures for granted. We know there are several monsters borrowed from Greek mythology, like minotaurs and sphinxes, and it’s somewhat common knowledge that golems come from Jewish folklore, and so on. But we’re often so caught up in the D&D versions of things that we don’t consider how they work outside the game. It’s rare for gamers to use the word “elfin” for anything that does not directly relate to elves, or “infernal” to relate to a single, very specific inferno. Did you know that to the average person, “aegis” and “paladin” are words used so rarely they might as well be mythical? I know, it’s nuts. And that’s exactly where I went when I started looking at the chimera.

In D&D a chimera is half-goat, half-lion, with three heads: a great cat, a goat, and a chromatic dragon of some persuasion. It has wings, it breathes fire or something, and it’s generally a mishmash of a bunch of other monsters. Various books modify this formula by switching out some of the heads for other animals, and there’s even a chimeric template in the 3E Monster Manual 2 or, as I like to call it, the Book of Bad Decisions. That template is basically “add a goat head, a dragon head, and wings to a natural animal”, so it’s pretty safe to say the base chimera is pretty canonical as far as D&D is concerned.

But try Googling “chimera”, right now. Even though our first thought is the chimera creature, the first link is about a genetic chimerism. But that’s actually the third type of chimera you find in the definition: 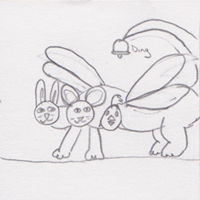 When I was working on the second Zelda campaign, I decided one of the themes was going to be animals, not least because I had found a series of really neat pictures of pseudo-magical creatures I could leverage. The players met spirits, each of which took the form of an animal, and allied with them to gain magical powers. When it came time to design the actual plot of the campaign, I decided they should have a leader the players could help. I didn’t want something simple like “lion, king of beasts”, I wanted something that represented as many animals as possible. I remembered chimera, the word more than the actual creature, and I found a picture that looked like a regal somebody with a motley combination of animal parts so we could have our version of Princess Zelda.

But along the way, I also took inspiration from the D&D chimera in that it was the spirit the final boss was using. Properly, he had gotten the power of the chimera spirit and given it to his allies, so his lieutenants were a lion, a ram, and a lizard/snake thing. When he failed to get the spirit leader’s power, he took the chimera power back, and the final boss was a standard D&D chimera, but a huge one with a snake tail and epic-level abilities.

I could have tried this all over the place, and I imagine I know an etymologist or two who are already thinking about it. For example, think of a draconian society ostensibly ruled by dragons but actually managed by a vampire (Dracula). Or consider the lamia, which has four different versions in mythology, none of which are the lamia in D&D. What if there are different types of lamia, all looking like different monsters with different agendas, but they’re actually working together to advance lamia-kind? Most monsters have a basis somewhere, in some mythology or fiction, and it’s surprisingly fruitful to look at one and ask “what is this creature, really, and how can I make it interesting?”