F is also a surprisingly hard letter. Few creatures begin with F except those who do it by virtue of having some modifying word: flesh golems, frost worms, forest drakes, etc. I’ve really only used one F creature, and even then only once, and even then I didn’t use the creature exactly as intended, but it’s the closest I have.

Given that fire is one of the building blocks of the universe, it’s no surprise how many creature have “fire” or “flame” in their name: elementals, giants, mephits, skeletons, snakes, and that’s just off the top of my head. Usually “fire” indicates an escalation from the original creature. Not only does it deal fire damage, usually in addition to its normal attacks, and not only is it resistant to the most popular damage type players have, but a fire creature is often stronger and tougher than their base. This is the case with fire bats, which are basically bats that have a hard time hiding in caves but are a much bigger threat to low-level parties. Bats already have a bit of a reputation among gamers, so hitting them with one that doesn’t go down in one hit is a quick path to a table flip. 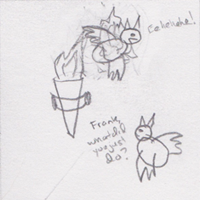 But I ran a Zelda campaign, so I had to include their bat equivalent, keese. And since keese were one-hitpoint minions, I could throw them in pretty much at any level as a way to annoy my players whenever they showed up late for game too often. We also had an escalation of that mechanic, which we called super-minions: creatures who became bloodied after one hit and died after a second. It meant they weren’t completely invalidated by any persistent or automatic damage, but never so serious that they were a real threat except in the context of the monsters they accompanied. Fire bats, or here fire keese, were super-minions. If they took damage or hit an opponent, they lost their flame, and almost any damage dealt to a flameless keese killed it. The exception was fire damage, which healed them back up to full hit points (which, to be fair, was 2).

Players usually hate it when enemies heal themselves. Not here. They loved the keese’s mechanic, and they immediately assumed they would have the same problem with cold damage because that’s what happened in the games (“Sure,” I shrugged, “why not?”). The keese themselves were smart enough to hit and run, bonking a player and retreating to the safety of a nearby torch or pool of lava. Even later in the campaign, when they players fought normal keese again, they tried to avoid dealing fire damage to them, and I ran with it. A lot of that campaign was about mimicking the feel of the video games, and you can’t buy that kind of player investment.

The reason I’m reluctant to include fire keese in this month’s festivities is because I made them up whole cloth. They’re not a reskin of anything in D&D, and I don’t even think I looked at the official bat’s statistics when I made mine. They’re just a creature with an interesting concept that challenged the players as much as the characters, especially the party tank who loved setting people and things on fire. The thing that nudged me over the edge is the story of the time two keese were fluttering around, trying to figure out how to attack the party, and one said to the other “let’s set ourselves on fire and double our hit points”. My players and I have a soft spot for that kind of lampshade.