H is for Hezrou, Prince of the Dark

I went back and forth several times on what to do for H because I had two good candidates, both evil outsiders and both campaign villains in different ways. I settled on this one because while I did something interesting with the horned devil’s background, in the campaign’s story he was pretty much just a horned devil. My hero definitely was not.

A hezrou is a mid-level demon, something like a large, martial version of a frog. Calling it a giant evil Battletoad would not be the least apt comparison. They’re smart but not ambitiously so, and they’re straightforward in combat: toss a spell perhaps, wade into melee, claw, grab, deal damage during grab, repeat until combat ends. Their signature power, and the only thing that keeps them from essentially being D&D’s version of Brock Lesnar, is their stench. It’s either an aura or a grapple effect depending on which edition you use, and it nauseates its victims. Nausea is one of D&D’s scarier status ailments because it prevent you from attacking, casting spells, or doing any similarly profitable action, so a hezrou can turn a combat on a dime if the right character succumbs to his stench.

The hezrou ticks most of the boxes in my “Reasons Not to Use a D&D Monster” list:

☑ Too simple; just does one thing
☐ Too complicated; forty-seven spell-like abilities
☑ No interesting backstory or setting
☑ No goals besides “eat players”; hard to put into stories
☑ Works best as part of a whole, or needs a support system
☑ Power that prevents player action or agency
☑ Power that can win or lose the fight on a lucky or unlucky save
☐ Obviously badly designed; non-functional as written
☐ It’s, like, super popular in Forgotten Realms
☐ So much blood

But when I did use the hezrou, it wasn’t because I thought it was a good idea. It was out of desperation. 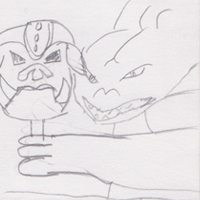 My intention in the first Zelda campaign was to have a villain who was not Ganon. I thought a group of mid-level players wouldn’t be powerful enough to fight the actual Ganon, and I thought a different villain would lead to a more interesting story. Over the course of the campaign I realized how much the players really, really wanted to fight Ganon anyway, but I wavered on it because didn’t fit what I was doing. Come the final session, the final boss turned out to be really underwhelming and she largely went down without too much of a fight. The campaign wasn’t ending on a good note, and we still had some time left in our gaming block. In a pinch, I flipped through the books real quick to find a creature who kind of fit Ganon’s build, wasn’t too complicated, and sat at an appropriate final boss CR. The hezrou fit the bill, so I reskinned his stench as an aura of evil, the same thing that prevented the player from targeting him in Ocarina of Time.

It worked out, mostly because we ignored everything about the hezrou itself and just used its stat block (take a drink). The players who lived liked the final battle and they got to go home knowing they had defeated true evil instead of just a bunch of guys. I immediately went and screwed up that ending by trying to close out a plot about which the players didn’t care, but for a brief moment things were great.