U is for Umber Hulk, Lying in Wait

Today I really wanted to talk about the Friendship is Magic session during Delve Night, where we pitted the players against the show’s heroes, including unicorns, to disable a magical ritual that hurt anybody without friends. But on reflection, I didn’t design that session. I helped with some of it, but I really just took somebody else’s custom monsters and used them. And if I can’t talk about how I used unicorns, I have to talk about the only other U creature anybody can name.

Umber hulks are another creature proprietary to D&D. They’re something like a gorilla covered in chitin with the face of a beetle. They live underground, they burrow, and they’re pretty good at grabbing things and either eating them to death or absconding with them. Their signature ability is a gaze attack that confuses enemies, often baffling them into attacking themselves or each other. Depending on your edition they’re either somewhat clever or startlingly intelligent, and they’re better at guerilla tactics than one might expect from a cave-dwelling bug.

I just realized they use guerrilla tactics and look like gorillas. There is no need to comment about it.

I’ve always liked the look of the umber hulk, but I’ve never found a good opportunity to use them as written. My main problem is the very hit-or-miss confusing gaze. When it hits, players lose their actions bumbling around like fools, which isn’t fun for them. When it misses, the umber hulk loses most of what keeps it from being a boring claw-claw-bite monster like a dozen others at its CR, and that’s not fun for me. The things that make them fun are the things the book trusts the DM to come up with: its lair, its tactics, its priorities, and the way it moves across the battlefield. The good news is that you could take out the gaze and use the remaining stats for any burrowing creature (take a drink), but the bad news is they’re still a lot more work than other creatures are, and a lot of its fluff is also hit-or-miss depending on how the players react. 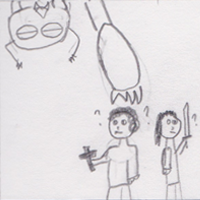 Instead I went the other way, using the concept of the umber hulk instead of its stats. I used that idea for bosses in two campaigns, both large insectoid creatures who lurked in shadows and had weird, confusing lairs. One passed through walls, grabbed characters, and carted them off, and a significant portion of the fight was trying to save the ranger’s animal companion from its clutches. The other was a Zelda boss, so it didn’t do much until its final battle but I peppered the dungeon with foreshadowing about it, and it was completely immune to damage from everything but environmental effects so the players had to engage it in a set piece instead. The large, crafty monster who attacks from ambush is a fine idea to strike terror in players’ hearts, and if anything the umber hulk’s stats detracted from it, so I made my own. And I got to use my huge umber hulk miniature even though the umber hulk is normally large, so that’s a bonus.

I think Wizards understood some of the issues with the umber hulk given the options they presented for it. I recall one book recommending that DMs give monsters class levels to mix things up, and the example they used was an umber hulk druid. The players would approach it expecting a straightforward fight, then it would cast flame strike and the players would rethink their lives. My first thought when I read that was “that takes seven levels of druid, which isn’t a good fit for the umber hulk’s skills and abilities”, but my second was “that’s a neat idea.” The under-appreciated Enemies and Allies splatbook also had Blind Jak, a traveling umber hulk monk who wore a blindfold so he wouldn’t confuse his allies. Neither of these really works with the flavor of an umber hulk, but I appreciate it when the designers try to make a monster more interesting than it deserves.