X is for Xorn, Who Are Just Kind of There

This is the first monster I thought of when I decided to write about them for April. Other letters were hard, even ones I thought wouldn’t be, but there was always one and only one creature who could fill the spot for X.

Xorns are three-armed, three-legged, roughly spherical creatures from the Elemental Plane of Earth. Their main character trait is their appetite; they can only eat rare metals, gems, and minerals, and given that those are harder to come by on the Material Plane they spend much of their time scavenging and searching for veins underground. They get bigger as they get older but low-level xorns are surprisingly hardy for their CR, and they have a few gotcha abilities and defenses that reward players who know a thing or two about outsiders.

Xorns seem designed to be random encounters, either bargaining with the party for sustenance or attacking when somebody gets between it and its next meal. As such it’s weird that in 3E they carried no treasure and in Pathfinder the older ones often come with class levels, respectively lowering players’ and DMs’ interest in them. You might think of them as smarter earth elementals, and they carry many of the same problems and benefits. Players aren’t likely to remember a xorn from session to session, and few DMs can get excited about a society or cabal of xorns whose goal is…eating more exciting food, I guess. You also can’t use their stats for much else as it’s hard to think of a creature with three arms and earth glide that isn’t a xorn itself. No, to make a xorn a memorable encounter, you have to give it some character yourself.

In The Eight Arms and the Empire of Sin, the party went underground to search for a monster acting as an avatar of pride. Their guide was an ioun stone that ramped up the emotions of the character using it, so while the party was tracking a sin of pride, it was only because their peacock-themed paladin was falling prey to it. She felt the creatures of the caverns were beneath her, and she was pointedly not considering the possibility of an ambush, especially not one that literally popped out of the wall. A surprisingly crafty xorn approached them, perhaps a minor scuffle occurred, but in short order it had plucked the stone from around her head and swallowed it. 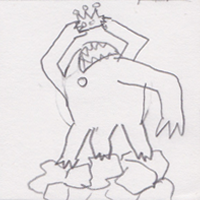 Thus entered the Xorn of Pride, who demanded to be addressed in title case but preferred more ostentatious epithets like King of the Earth or Super Kami Xorn. It was not the fastest, or the smartest, or the hungriest xorn, but if you tried to tell it that, it wouldn’t listen. Running it let me be as bombastic as I wanted, a high bar, and put the party in that wonderful state where they dislike an NPC as players but know they have to appease it as characters. They immediately created their own side quest to remove the stone from the xorn, more because he was annoying than because they needed it to progress, and it gave me a warm feeling when they decided killing it was neither productive nor necessary and instead took the moral high ground.

They never did get that stone back, which means there’s still a xorn running around convinced it’s the greatest thing on three legs. Every once in a while I bring it up, and the players remember they’re still going to have to deal with it one day. I don’t know if it’s anticipation or dread, but I think it’s more than anybody has cared about a xorn in decades.

This entry was posted in Events and tagged A to Z Challenge, Eight Arms. Bookmark the permalink.