Y is for Yuan-Ti: Bad, but They Care

When I started playing D&D, it never occurred to me that certain creatures would be proprietary to it. I got into it because of the public-domain monsters I recognized, not because it was the only place I could find mind flayers and beholders. When I moved from my physical books to a linked HTML SRD I didn’t even notice most of the monsters that disappeared and didn’t much care about the flavor that went with it, except for the Greyhawk deities. But this creature I absolutely missed, quickly and deeply.

Yuan-ti are somewhere between humans and snakes,, and exactly where they fall on that gradient indicates their power. Generally, the more human a yuan-ti is, the weaker it is, and the most snakelike members of the race have leadership roles. This caste structure withstands even their normally chaotic nature, and lesser yuan-ti go far out of their way for the few methods by which they can advance to a new form and new power. They’re impressively religious, either following snake deities or evil for evil’s sake, and their leaders tend toward leading worship or being worshipped themselves.

There are more varieties of yuan-ti than one might expect, from the low-level, almost-PC-ready purebloods through the monstrous malisons and ignans to the nightmarish anathemas. They’re appropriate threats at almost every level of play, and I really like how they escalate so they can be the focus of an entire campaign or a side arc in a greater story. All of them have a few tricks to keep combat fresh, but not so many tricks that they get lost in the shuffle, and almost every yuan-ti is smarter than a human, too smart to rush into melee and get beaten to death. They have a strong visual aesthetic, they’ve been around long enough in most settings to have culture and cities, and they can even integrate themselves into other societies through guile and magic to pop up whenever it inconveniences the party the most. They’re just fun.

So why would I feel the need to make them more interesting? Because they’re unambiguous top-to-bottom villains. They’re evil humans mixed with evil animals who do evil things because evil gods told them to advance evil. They use poison, lies, intimidation, oppression, classism, and mind control to get what they want, and they’ll sacrifice anyone or anything, including each other, to gain power. This isn’t simple Saturday morning cartoon villainy because they’re too intelligent for that, and they won’t throw themselves into combat just because it’s time for a random encounter or because a book said they should. But there’s nothing redeeming about them. They’re an acceptable target for parties, and there’s intentionally no remorse or complication in breaking into their temples, killing everybody there, and stealing their belongings to sell. They’re a more advanced bad guy, but they’re still objectively a bad guy.

The monster campaign is where we did the best job turning this on its ear. One player ran a yuan-ti pureblood, one of the few characters who could pass for human if nobody looked too closely. Every PC in the campaign had some sort of character-specific enemy, and hers was her father, who wanted her to stop playing hero and instead come back home to continue on her rise to the top of yuan-ti society. He chased the party on and off for a while and finally appeared in the flesh at the end of Act 2, where he had gotten himself trapped somewhere and needed their help. The party had been going on the assumption that he wanted to menace them somehow and steal his daughter away, but he was actually following them out of genuine concern. 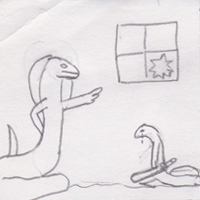 Even the most rampantly malevolent race isn’t beyond having connections or hobbies or opinions. Because the books only describe yuan-ti as religious jungle snake monsters we think that’s everything there is to know about them, but they can have families and traditions and favorite sports teams. Sometimes those loyalties can overrule their predilection toward evil, or at least suppress it. After all, religiously evil humans probably exist in every city and only the most militant paladin run by the most short-sighted player would assume they’re constantly up to no good. An evil monster isn’t any different from an evil PC. It’s all in how you handle it in service of the game.

This entry was posted in Events and tagged A to Z Challenge. Bookmark the permalink.