Z is for Zombie, Who’ll Do in a Flash

And nobody was surprised.

Zombies come in a startling number of forms in D&D. Off the top of my head you have normal stock zombies, fast zombies, diseased zombies, fire zombies, hulking zombies, zombie lords, and any combination of them, all before you consider that “zombie” is a template you can apply to just about anything with a pulse. I would describe them further, but I can’t. That’s the point. 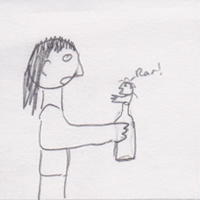 Unlike a vampire, which is the specific name for a creature with specific powers and specific weaknesses, “zombie” is an everyday metaphor (“I’m a zombie in the mornings before I have my coffee.”) that bring to mind actions and mood, not stats. A zombie can be a creature that shambles, or one that grunts half-heartedly, or one that comes in swarms, or one that spreads like a disease. They’re usually undead, but if you say the orcs are approaching like zombies, everybody knows what you mean. Anything can be a zombie, and a zombie can be anything (finish your drink). Heck, Cracked had an article that mentioned this just last week:

Zombies are popular because they fit everywhere. Vampires are zombies that you want to make out with. Frankenstein’s monster is a zombie that just took a little elbow grease to get going. We can apply any metaphor that we want to them, and we can use them as quick cannon fodder or as the plodding thing that we have to painstakingly evade once we find ourselves trapped in a room with one.

Zombies aren’t my favorite creatures because they’re usually too simple and straightforward, but that’s also their beauty. Looking back I think I’ve used them in almost every campaign I’ve run, either as zombies themselves or as something else through the magic of reskinning. Consider my last six:

This is not counting the non-d20 campaign we’ve running now. I guess that’s a spoiler, but not much of one. You can insert zombies into just about any campaign at just about any point, either as literal lurching undead or as anything that hits enough of a zombie’s checkboxes for you to describe the combat as a “zombie swarm scenario”. You can even use them with various moods, from the grim horror zombie whose bite slowly drives you so mad you kill your allies to the light-hearted cartoon zombies who comedically chase their heads around the battlefield. As long as a battle makes sense with the story, zombies can probably be a part of it.

This is a rare time when the reskinning can be completely transparent because nobody cares about it. Knowing that the orcs secretly use zombie statistics doesn’t break any immersion or narrative, and there are so many types of zombies you can use them for just about anything. When I’m using them, most of the manipulation I do is to the stats themselves, drastically slashing the zombie’s hit points so they fall in one or two hits. The feel is important, not the numbers, and zombies have a broad feel, perhaps the broadest of anything I’ve discussed this month.

I’d like to say something about angels to bring this full circle, but you may have noticed that we have an unmatched rhyme in the post names. There’s one more creature I want to discuss tomorrow before we leave monsters alone for a bit.

This entry was posted in Events and tagged A to Z Challenge. Bookmark the permalink.